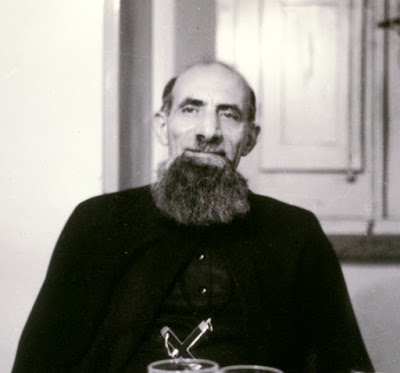 Our historical founder father Gaetano Liuzzo, Oblate of Mary Immaculate, fell asleep in the Lord after having celebrated the Mass on November 14, 2003. He was 92 years old.

That “historical” adjective is there because he himself wanted to be considered only as a “channel” of the charism of St. Eugene de Mazenod, Founder of his Congregation, of whom he was an exemplary son.

He was a Sicilian “doc”, with the typical features of that land. His strong, determined and impulsive character has gradually shaped and sweetened by both his deep Marian devotion and by accompanying us, his daughters.

His lovers: Christ the Savior, Immaculate Mary, the Congregation, the Institute. As a genuine oblate, he lived an accentuated – with a crescendo- optimism, obedience, passion for the mission and for the Church, and the spirit of prayer.

As soon as he was ordained as an oblate priest, he had the task of visiting the Italian seminaries by “Propaganda Fide” to infuse in them the fire of the mission. He did so with such enthusiasm that many were the adherents, and, with a certain humor, he called himself “fisherman and fishmonger …”.

Later on, in addition to the direction of the Italian magazine of the OMI, he was entrusted with the care of the Laity Association (AMMI), which were emerging around the Oblate communities. He cultivated so well the field that among the associates arose the first members of our Institute.  The Father was convinced that he wanted to found a secular Institute, even though he had a lot of difficulties as it was at the beginning of the 1950s when this reality was not yet well defined.

He wished above all that we live our consecrated secularism “to the highest degree”, that is, impregnated with a missionary spirit to go in mission “ad gentes” or be animators in our home country, because even before the Council confirmed it, he said that missionary apostolicity is the ability and the duty of every baptized.

In his spiritual testament, our father gave us a precise instruction to be lived out: “Love; the Christocentric, Trinitarian, missionary, and universal love… reincarnating the love of the Mother, as true new Mary of Nazareth, ardent and generous, as her, and with her”.

This website uses cookies to improve your experience while you navigate through the website. Out of these, the cookies that are categorized as necessary are stored on your browser as they are essential for the working of basic functionalities of the website. We also use third-party cookies that help us analyze and understand how you use this website. These cookies will be stored in your browser only with your consent. You also have the option to opt-out of these cookies. But opting out of some of these cookies may affect your browsing experience.
Necessary Always Enabled
Necessary cookies are absolutely essential for the website to function properly. This category only includes cookies that ensures basic functionalities and security features of the website. These cookies do not store any personal information.
Non-necessary
Any cookies that may not be particularly necessary for the website to function and is used specifically to collect user personal data via analytics, ads, other embedded contents are termed as non-necessary cookies. It is mandatory to procure user consent prior to running these cookies on your website.
SAVE & ACCEPT
Social media & sharing icons powered by UltimatelySocial