The foundation of the COMI Secular institute is closely tied to three essential and concomitant elements: 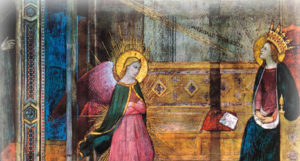 On August 22, 1951, in the Basilica of the Annunciation in Florence, eighteen young women, enthusiastic members of the Missionary Association of Mary Immaculate, consecrated themselves to Mary: the first “Oblate Sisters.” Later on, they took vows and their name changed as well until the current name: Oblate Missionary Cooperators of the Immaculate (COMI).

On July 27, 1963, came the decree of erection to Pious Union, with the approval of the Statute.

On February 11, 1987, the Diocese of Rome approved the Constitutions and erected the COMI as a Secular Institute with missionary goal.

On November 21, 2001, Feast of the Presentation of Mary, the Secular Institute Oblate Missionary Cooperators of the Immaculate (COMI) obtained the Decree of the Pontifical Approbation.

With this act, the C.O.M.I Constitutions become patrimony of the Church and the Holy Father, who approved them, became its guarantor.

The initial clarity of foundation, confirmed by life, gives to the Institute a precise “face”, characterized by two elements:

This website uses cookies to improve your experience while you navigate through the website. Out of these, the cookies that are categorized as necessary are stored on your browser as they are essential for the working of basic functionalities of the website. We also use third-party cookies that help us analyze and understand how you use this website. These cookies will be stored in your browser only with your consent. You also have the option to opt-out of these cookies. But opting out of some of these cookies may affect your browsing experience.
Necessary Always Enabled
Necessary cookies are absolutely essential for the website to function properly. This category only includes cookies that ensures basic functionalities and security features of the website. These cookies do not store any personal information.
Non-necessary
Any cookies that may not be particularly necessary for the website to function and is used specifically to collect user personal data via analytics, ads, other embedded contents are termed as non-necessary cookies. It is mandatory to procure user consent prior to running these cookies on your website.
SAVE & ACCEPT
Social media & sharing icons powered by UltimatelySocial